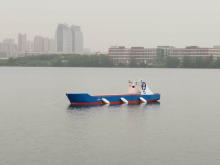 As part of the ongoing cooperation between Wuhan University, Delft university and other Dutch institutes, on October 10th, Dr. Jialun Liu and Dr. Feng Ma from Wuhan University of Technology visited the Netherlands.

A remote-control system for smart ships, which is based on the Navigation Brain System proposed by Prof. Xinping Yan, has been demonstrated. Representatives from Delft University of Technology, MARIN, Rijkwaterstaat, and Port of Rotterdam attended and observed the demonstration. The remote-control system successfully presented the ability of controlling a 7 m long KVLCC2 boat in Wuhan, P. R. China from Wageningen, The Netherlands with a distance about 8000 km. The system shows a possibility to use a combination of 4G and public internet to remote-control ships with long distance at a low cost, which could be a effective and efficient way for inland vessels and short-sea ships.

Furthermore, applications of the Navigation Brain System to assisted navigation on ferries in Nanjing Banqiao and virtual-real interaction tests of smart ships are also presented by Wuhan Univeristy of Technology. The assisted navigation system provides a digital-twin of the navigation environment for both captains on the ferries and administration officers on shore. With the help of the system, captains are enhanced for navigation during nights and foggy days. The virtual-real interaction test platform provide a mixture of visual ships built on mathematical modeling and real traffic captured from live environment.

The platform can test and compare the performance of autonomous navigation systems by steering the vertical ships though the real traffic. It can also be used to train Artificial Intelligence to control a ship through machine learning algorithms. Afterward, future collaborations on topics relevant to smart ships are proposed and discussed.